Berkshire lies to the west of London and the scenery varies from chalk downlands in the north and west to lower lying gently undulating Palaeogene and younger strata in the south and east of the county. 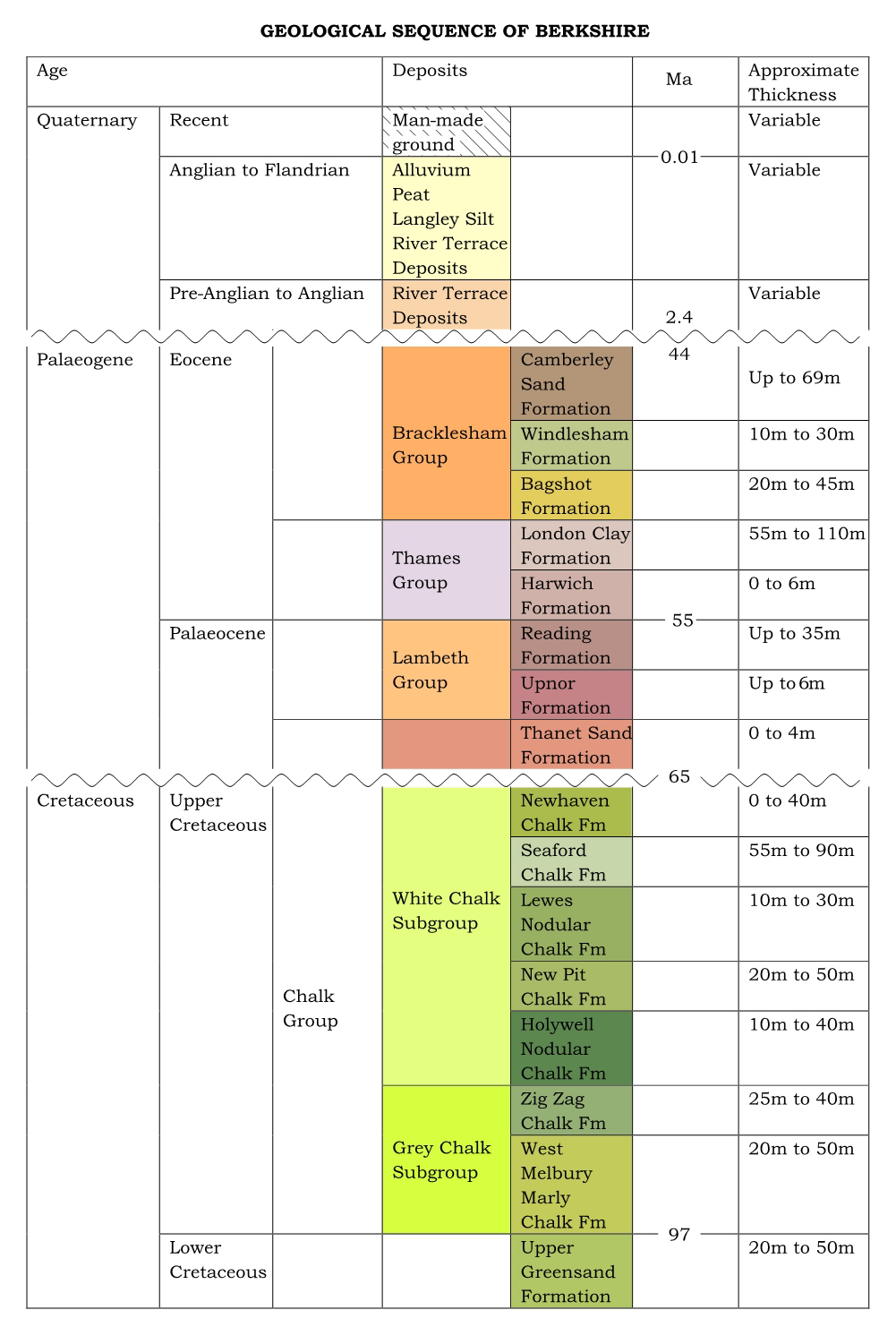 The oldest rocks proved in the region are steeply dipping Ordovician and Silurian sediments. These have been found in deep boreholes and shown on seismic reflection profiles.  The originally flat lying marine sediments were folded and faulted during mid-Devonian times when the area was situated on the northern edge of a continent named Avalonia that collided with the northern continent of Laurentia.  This collision resulted in uplift forming the London Platform, part of a ridge of high ground that extended from Wales to Brabant in Belgium. The area was one of erosion rather than deposition and for about 200 million years there is a long gap in the rock record of the eastern part of the county.  The London Platform influenced sedimentation from the mid-Devonian until the Late Cretaceous.

During the Palaeozoic the area to the south of the region was occupied by the Rheic Ocean, and a marine transgression in the central and western part of Berkshire during the Late Devonian led to deposition of a thin sequence of Carboniferous limestone.  This deposition was followed by uplift and erosion and it is only during the Westphalian that deposition of Coal Measures in river and lake environment occurs. There are some basaltic lavas and dolerite sills emplaced within the Coal Measure sediments. Back to top

The Chalk is at outcrop in the central area of the County − in the area of the Berkshire Downs and along the valleys of the Thames, Kennet and Pang. In the south of Berkshire the Chalk is overlain by Palaeogene deposits. The Chalk can be divided into three units: Upper, Middle and Lower Chalk. They are lithologically very different and can be easily distinguished on either lithology or fossil content.

A large proportion of the topmost Chalk has been removed as a result of erosion. Consequently the youngest bed of the Chalk present would appear to be the Newhaven Chalk (of Mathers and Smith, 2000). Deep boreholes have proved a total thickness of about 190 m, although the thickness varies across the County.

In fact, the Chalk of Berkshire is about half the thickness of the Chalk anywhere else in Britain. This is because the area lies on an uplifted belt know as the Berkshire-Chiltern shelf, which is part of the London Platform. As an uplifted area during this period of the Cretaceous (95 to 65 million years ago) the sediments were deposited as a condensed sequence in comparatively shallow water.

However, like the Chalk elsewhere, the chalky ooze was deposited well away from any shoreline − resulting in a very much reduced clastic input and a pure, white limestone known as the Chalk. (Photo shows Chalk and Palaeogene unconformity at Rushall Farm)

The three divisions of the Chalk are fairly easy to distinguish − the grey, calcareous clays of the Lower Chalk are very distinctive and they become more calcareous (and whiter) upwards. The Middle Chalk is a soft, white and nodular rock. Most of the Middle and all of the Lower Chalk have no flint content. Flints are only developed from the uppermost Middle Chalk and then throughout the Upper Chalk, where they become very abundant. Back to top

Palaeogene deposits are only found in the south of the county. The Reading Formation is best known from the Reading area, although outliers remain for some distance from the type locality. The deposits average 18 to 28 metres in thickness, although they are not present everywhere, and thinner outliers are common too. These sediments are non-marine and are mostly composed of palaeosols (mottled clays) and estuarine sands. The palaeosol clays have been the source of the clays used in the brick and tile industry since Roman times and before.

The London clay is a blue-grey clay with areas of browner silty clays, sometimes glauconitic and sometimes fossiliferous (shelly). The unit is up to 100 m thick. This deposit marks a transgression and the return of a marine environment over Berkshire. It contains marine fossils such as sharks teeth, but also shows evidence of not being too far from land − by abundant wood being present in some horizons.

A pebble bed of rounded black flints marks the base of the Bagshot Formation. The pebble bed is followed by a 20 to 25 m sequence of yellow-brown, fine to medium grained sands which are quartz-rich and sometimes glauconitic. This deposit heralds a fall in sea-level. Much of the Tertiary sediments are missing due to uplift and erosion over this period. During the Miocene in particular there was uplift due to the Alpine Orogeny and formation of the London Basin. Back to top

There is a thin veneer of Quaternary deposits over most of the hilltops and within the valleys of Berkshire. The superficial geology of the county can be summarised as follows:

There is a large unconformity (gap in the geological record) where we are flung from the hot and humid conditions of the Lower Tertiary sediments into the periodic icy wastes of the Quaternary − the Ice Age. In fact, the ‘Ice Age’ consisted of many cold phases where ice advances are separated by warm periods − the interglacials. Many of these interglacials were as warm, or warmer, than today.
The last glaciation occurred during a period known as the Devensian (115,000 to 10,000 years ago). However, there were several other glaciations prior to this. Research is still being undertaken to establish exactly the extent and duration of each cold phase, but as each successive glaciation wipes out much of the evidence of earlier ones, this is a difficult and contentious area! However, few researchers would argue against the fact that there are two important glaciations before the Devensian and these are the Wolstonian (around 240,000 years ago) and the Anglian (about 450,000 years ago). The ice advanced only as far south as Hunstanton during the Devensian. The ice had come further south but still within present-day Norfolk during the Wolstonian whereas the ice had reached the furthest south during the Anglian (to mid-Bucks and Herts). It was this ice sheet − the Anglian − which led directly to a diversion of the Thames river from a course along the present day Vale of St Albans to the course through central London.

During the late Pliocene to Quaternary southern Britain had been subject to a downwarping to the east and the area had been uplifted relative to the southern North Sea Basin. The result is a marked down-cutting by rivers in this region, producing incised river valleys with successive terraces. In fact, many of the Berkshire rivers have relatively small channels now in comparison with their past glories during the cold stages which were characterised by braided river systems. The terrace systems are complex; the sedimentology is largely uniform but clast content can change although not necessarily unique to each terrace. Up to ten different terrace levels have been recognised. The sediments of these terraces reveal a complex history of cold stages and interglacials, the ancestral history of the River Thames drainage systems including the major reorganisation 450,000 years ago as well as the provenance of the river sediments at each stage of its history. In summary the terraces of the main river systems are:

One of the main geomorphological features of the River Thames is the Goring Gap. Separating the Chilterns chalk from the Berkshire Downs chalk, the Goring Gap is arguably the most impressive fluvial landform in Britain and contains various terrace remnants.. From the Jurassic lowlands around Oxford, the River Thames flows anomalously across the Chalk upland of the Chiltern Hills/Berkshire Downs via ‘The Gap’ and then enters the London Basin, initially onto the Lower Tertiary (Lambeth Group) in the Reading area. Sir Aubrey Strahan, who served as the Director of the Geological Survey from 1914 to 1920, originally proposed that the Thames was superimposed from a former Tertiary cover onto the underlying Chalk. Other interpretations such as glacial lake overflows have been postulated but our present day understanding of the geology gives no support to them. As William Whitaker (Geological Survey Thames Basin expert in Victorian times) appreciated, ‘The Gap’ is primarily the result of fluvial processes operating over a several million year time scale.
Back to top